Back a few weeks ago I bought some slide film and busted out my old-school Nikon film SLR. Here is a nice shot of Boston that I took around sunset one evening in October from near the Mass. Ave bridge. I used a polarizing lens, and the lighting was really interesting. I was also using Kodak Ektachrome 64 slide film, which is particularly good for cool colors, such as the sky. I have some more pictures that I took on a backpacking trip that I will post sometime soon as well. 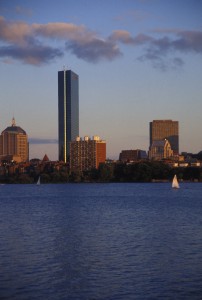