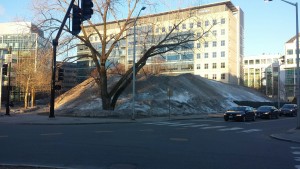 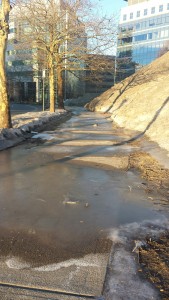 The glacial flows from Mt Kendall are a menace to pedestrians. 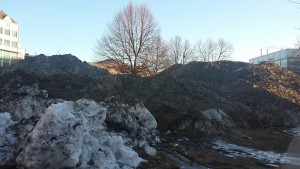 Mt Kendall swallows everything in its path.

With all the snow in Boston this winter, several new mountain have formed out of desperation for places to put snow. Here are of few pictures of what I call Mt. Kendall. Since the first day of spring was last week, I wanted to document Mt. Kendall, which I pass each morning on the way to work. It has a vertical of about 30 ft, multiple peaks, and several glaciers. As the mountain melts, an interesting collection of show shovels, parking cones, bits of car bumpers, and other debris has begun to emerge. It might be interesting to take an ice core and study the strata from the different storms to learn about what people were doing last January.

For some reason, the Kendall Square Diamond which was abandoned at this location several years ago was kindly moved to the side before the dumping began, and was spared the full wrath of Mt. Kendall.

I have also heard reports of another mountain at the western edge of MIT that many have begun calling Mt. Cambridge-manjaro. It is supposed to be good for late-season sledding.

Anyone want to guess when the last day I can find snow here is? My guess is the first week of June.