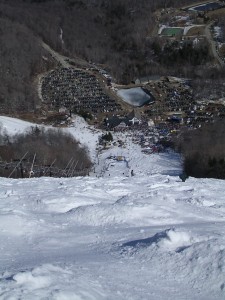 This past weekend I went to visit my sister at Dartmouth. We went skiing at Killington on Saturday, which was one of the nicest days of the ski season. It was ~50 degrees and sunny, and Killington was running the Bear Mountain Mogul Challenge, which is a big outdoor party (this year featuring Blue Oyster Cult) coupled with an amateur mogul competition. The picture below captures it well. Mogul bums are everywhere, it’s 50 degrees, I’m skiing Outer Limits at Killington while rocking out to Blue Oyster Cult, who is playing a concert at the bottom of the run. People are tailgating on the ski slopes (we saw one group boiling lobster on their grill on the slopes) and yelling for more cowbell.

On Sunday we went to the Ben and Jerry’s factory and the Green Mountain Coffee factory/museum. Both were exciting, although we didn’t get a tour of the coffee roasters, and thus didn’t get any free samples.